Order of Words in a Sentence


To make meaningful sentences we need to arrange words in a particular order. The usual order of words in an English sentence is as follows:

In an affirmative sentence, the subject usually comes before the verb.

Interrogative sentences usually begin with an auxiliary verb followed by the subject. 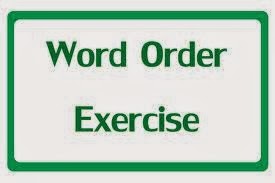 The object usually comes after the verb.

When an adjective is used attributively, it comes before the noun it qualifies.

When an adjective is used predicatively, it comes after the verb.

An adverb is usually placed close to the word it modifies.